Fort Churchill, NSDAR, was organized in Fernley, Nevada, on October 06, 2012, by organizing regent Linda Garrett and twelve patriotic women. After a brief telephone call to National, we received affirmation that the Fort Churchill, NSDAR, had been confirmed. After the meeting we took time out to celebrate the 122nd birthday of DAR. Our regular meetings are held in Fernley, Nevada the first Saturday of each month from September through May. 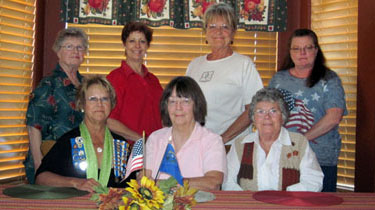 In 2012 one of Rebecca Smythe Eisenman's projects as State Regent was to create and grow a small garden of heritage roses at the Sprague house in Goldfield, Nevada. The roses chosen are "antique" roses, cold hardy and drought resistant. These would have been available to Mrs. Sprague to plant in her garden of 1910. The bed for these was prepared in October 2011 and the roses were planted in early May to allow them time for their roots to settle in before the heat strikes. To celebrate this minor accomplishment, the second part of her project was to create a state member award called the "Nevada Rose Award". Linda Garrett was one of the first to receive a clipping of the heritage "antique" rose bush as the 2012 Fort Churchill, NSDAR, Rose Award recipient. These are her roses in 2018.

Membership Inquiries or Website Issues
Page updated January 13, 2023
The content contained herein does not necessarily represent the position of the NSDAR. Hyperlinks to other sites are not the responsibility of the NSDAR, the state organizations, or individual DAR chapters.