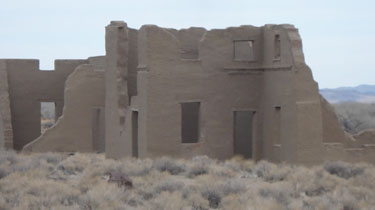 Fort Churchill State Historic Park is a state park of Nevada, USA, preserving the remains of a United States Army fort and a waystation on the Pony Express and Central Overland Routes dating back to the 1860s. A 1994 addition forms a corridor along the Carson River. The park is in Lyon County south of the town of Silver Springs. Fort Churchill is one of seven National Historic Landmarks in Nevada. The site is one end of the historic Fort Churchill and Sand Springs Toll Road. It is located on U.S. Route 95 Alternate, eight miles (13 km) south of U.S. Route 50.
Fort Churchill History [Brief] 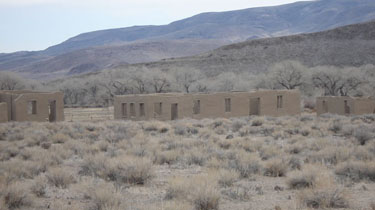 In 1860 a band of Paiutes and Bannocks attacked Williams Station along the Carson River in retaliation for the kidnap and rape of two young Paiute girls by the proprietors of the station. In retaliation a small group of volunteer soldiers and vigilantes led by Maj. William Ormsby attacked the Native Americans, starting the so-called Pyramid Lake War. Ormsby's force was defeated and in response Colonel John C. Hays and Captain Joseph Stewart led a larger force of volunteers and U.S. Regulars to defeat the Natives at the Second Battle of Pyramid Lake.

Captain Stewart, leading the Regular contingent, afterward established a permanent U.S. Army fort along the Carson River near the location of where the hostilities began at Williams Station. The post was named Fort Churchill for Sylvester Churchill, Inspector General of the U.S. Army. Construction on the fort began on July 20, 1860, and was completed in 1861. Built to provide protection for early settlers and the mail route along the Pony Express, the fort became an important supply depot for the Union Army during the American Civil War. Average strength during this time was 200 soldiers, but the post was abandoned in 1869 shortly after the conclusion of the Civil War. The abandoned buildings were sold at an auction for $750 after the state of Nevada declined to take possession of the property. 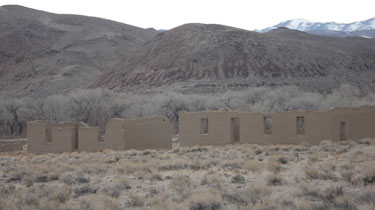 Marker Significance: Fort Churchill was founded in 1860 at the height of Indian attacks on settlers in Nevada. The Carson River Expedition led by Captain Joseph Stewart was ordered to establish a post on the Carson River which would assist in guarding the Pony Express and other mail routes as well as the protection of settlers. Hundreds of soldiers served at the fort named after Sylvester Churchill, the Inspector General of the US Army. The fort consisted of adobe buildings constructed on stone foundations in the traditional form of a square which faced a central parade ground. The onset of the Civil War made Fort Churchill a vital supply depot for the Nevada Military District and as a base for troops on patrol on the overland routes. Around 200 soldiers were stationed at Fort Churchill at any given time.

By 1869 Fort Churchill had outlived its use. The adobe buildings were auctioned for only $750 when the fort was abandoned by the military. Remains of soldiers buried in the post cemetery were moved to Carson City in 1884. The cemetery remains a part of Fort Churchill today, but the only remaining graves are of the Buckland family, pioneer ranchers who sold supplies to the fort.

The State of Nevada, only seven years old, declined the chance to acquire Fort Churchill in 1871. For many years the fort lay neglected, used primarily as a shelter for travelers on the Carson River Trail. Some scavenged the fort remains for building materials.

In the early 1930s the Nevada Sagebrush Chapter took an interest in preserving the fort. The State of Nevada took custody of 200 acres of the original military reservation on October 6, 1932. Aided by the passage of Assembly Bill 189 by the 1931 Nevada Legislature, the State of Nevada in turn deeded the land and buildings on April 30, 1934, to the Nevada Sagebrush Chapter DAR to hold in trust. The National Park Service made restoration plans, and the Civilian Conservation Corps (CCC) renovated the fort remains and built the visitor center. But World War II pulled manpower away from the fort and it was vandalized and damaged from weather until interest returned in 1957 when it became a part of the Nevada State Park System. On February 16, 1961, the title of Fort Churchill was reconveyed from the DAR to the State of Nevada. A Governor’s proclamation declared Fort Churchill a state historical monument.

The bronze marker reads: “This plaque commemorates the efforts of the Nevada Sagebrush Chapter Daughters of the American Revolution to preserve the integrity of Nevada’s first and largest military outpost. Two hundred acres of the original military reservation were granted to the State of Nevada by the federal government on October 6, 1932. Nevada, in turn, deeded the land and buildings on April 30, 1934 to the Nevada Sagebrush Chapter DAR to hold in trust for the State and as custodian for the perpetuation and preservation thereof. By deed pursuant to trust, dated February 16, 1961 title to Fort Churchill was reconveyed to the State of Nevada that it might, by official proclamation, be designated a state historical monument.” The marker was dedicated on October 22, 1967. Pictured at the marker dedication is Honorary State Regent Alice B. Addenbrooke, who was a featured speaker at the dedication and was instrumental in the Fort Churchill park effort.

Directions: From Carson City, take U.S. Highway 50 east through Dayton to NV-28. Turn right on NV-28 and continue to just before the junction with U.S. Highway 95. The route to Fort Churchill State Historic Park is well marked. The marker is mounted on a stone monument by the U.S. flag pole in front of the visitor center.

Membership Inquiries or Website Issues
Page updated October 12, 2022
The content contained herein does not necessarily represent the position of the NSDAR. Hyperlinks to other sites are not the responsibility of the NSDAR, the state organizations, or individual DAR chapters.